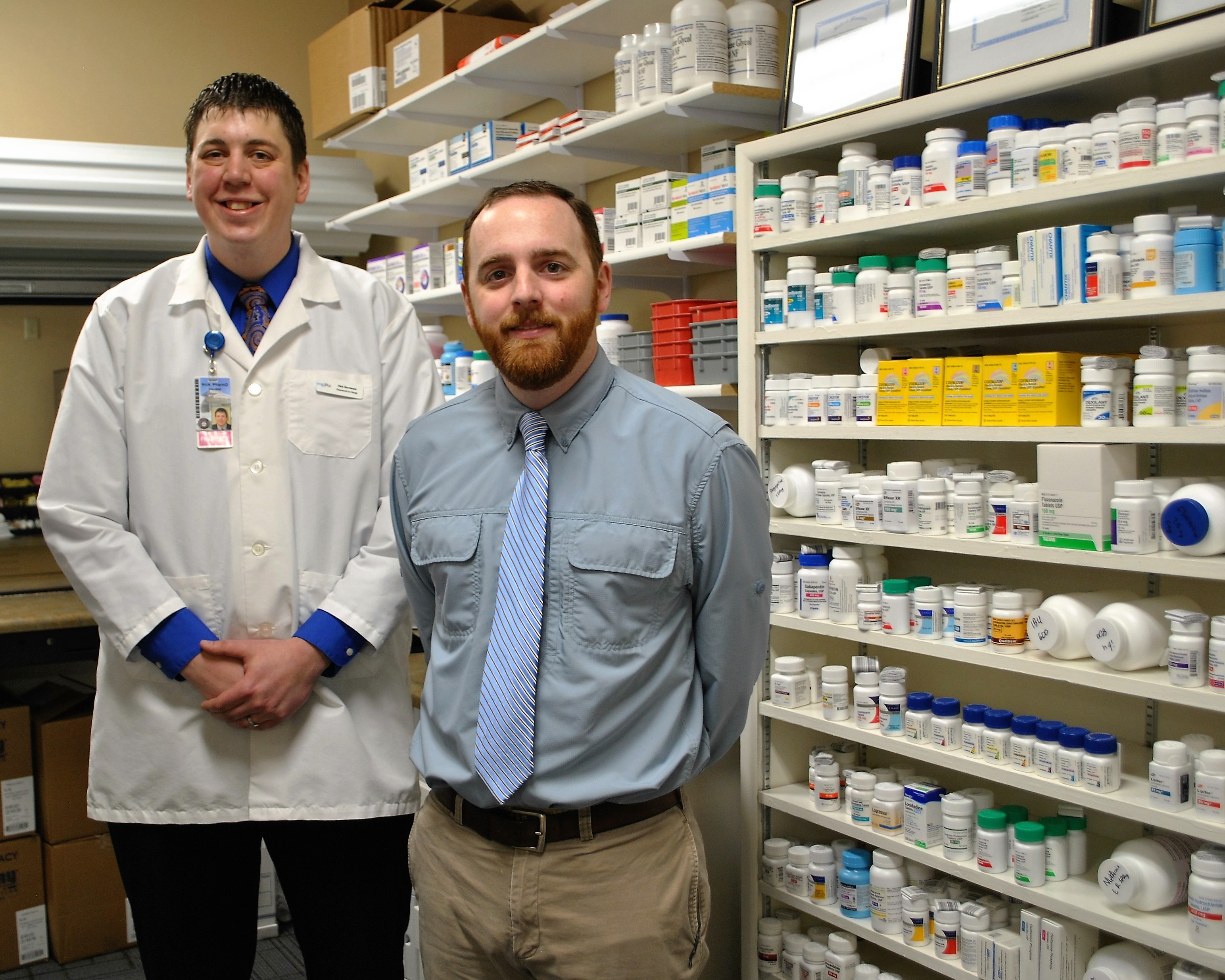 Nick Herrmann, PharmD, is the new clinical pharmacist that will manage the Memphis Community Pharmacy at Memphis Medical Services. Nick is a native of Hinckley, Illinois, a small, rural town in North Central Illinois with a population very similar to Memphis. Nick is a 2010 graduate of the St. Louis College of Pharmacy and has been a pharmacist with the Shop ‘n Save grocery retailer in the St. Louis area for the last seven years. Nick and his wife, India, a native of Kirksville and also a pharmacist now employed at Rider Drug in Kirksville, have relocated to northeast Missouri along with their two small children, son Aiden-age 3 1/2 and daughter, Charlotte-age 18 months. Outside of work, Nick enjoys spending time with his wife & kids and he enjoys following most professional sports. Since moving to the area, he says he’s enjoyed fishing with his son.

“We are constantly looking for ways to improve our patients’ experience,” said Randy Tobler, MD, FACOG, CEO of Scotland County Hospital. “With this new service, we hope to make filling prescriptions even more convenient, and in some cases more affordable, so our patients can get home quickly and the healing process can begin. You’ll want to stop by and meet Nick & Josh and have a cup of coffee from our new complimentary coffee service in the lobby of the new pharmacy.”

The new community pharmacy, which is located where International Eyecare Center (IEC) used to be located at Memphis Medical Services, is bringing an additional service to the patients of the area. The hospital has contracted with the new pharmacy for the 340B discount drug program. There is currently not a 340B contracted pharmacy in Memphis. The hospital’s closest 340B discount drug program partners are in Kirksville (Rider Drug) and Edina (Knox County Pharmacy). IEC expanded and moved to the Hospital’s Annex Building, once occupied by the Health Department.

The 340B discount drug program is a hospital program, not a pharmacy program, governed by the Health Resources & Services Administration (HRSA). To comply with the program, a hospital (340B applies only to safety net facilities like Scotland County Hospital) buys the drugs from a third party vendor that buys the drugs at a greatly reduced rate from drug manufacturers that are required to make the rate similar to what is sold to the Veterans Administration. The hospital contracts with a pharmacy (or multiple pharmacies) to dispense the drugs for a mutually agreed upon dispensing fee, which the pharmacy retains.
Scotland County Hospital and clinic patients at all 3 locations (Memphis Medical Services-MMS, Lancaster Medical Services-LMS, and Wyaconda Medical Services-WMS) will have the same choice they have always had to choose any pharmacy they prefer to fill their prescriptions. Should they choose any of the hospital’s contracted 340B pharmacies (Memphis Community Pharmacy, Rider Drug or Knox County Pharmacy), their choice helps support the Hospital’s many medical services and mission to serve the community’s health needs. In fact, often the 340B program can provide lower out of pocket costs for expensive medications for our patients.

In addition to serving patients from MMS, LMS, WMS & Scotland County Hospital as well as patients from any other clinics in the area, the new pharmacy provides a prescription delivery service to hospital patients right before discharge and ER patients prior to discharge, during pharmacy operating hours. For MMS clinic patients, it’s similarly convenient since they can now stop at the pharmacy, located in the clinic lobby, to fill prescriptions before they leave the clinic.

“The Board, Administration and entire patient care team at the Hospital and Clinics are excited to have this new venture that brings patient care and service to the next level,” said Randy Tobler, MD. “Many patients leaving the clinic, hospital or emergency room often have prescriptions to fill. By having a retail pharmacy on site, we can offer a convenient and very accessible option for patients, visitors and even our staff. Previous experience indicates that on site pharmacies result in patients taking their meds more reliably, and that means a healthier patient and community.”

Memphis Community Pharmacy is open Monday through Friday from 8:30 am until 5:30 pm. Nick reports that most major insurance plans are accepted at the pharmacy, as they would be at any other pharmacy. He said that patients who want to use Memphis Community Pharmacy can simply direct their prescribing clinician, from any clinic in the area or even outside the area, to use the hospital’s pharmacy. Prescriptions are electronically sent there as they would be to any other pharmacy in the area.